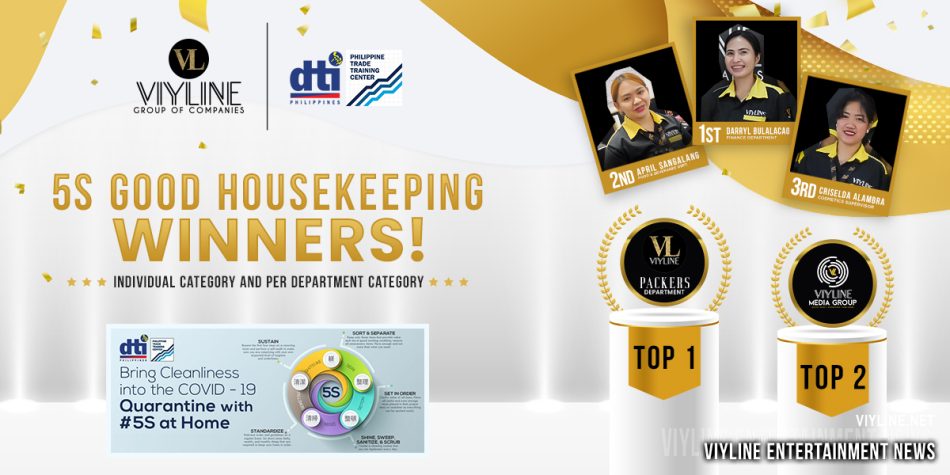 There’s no way but up for Viy Cortez’s VIYLine Group of Companies (VGC) as the company conducted a 5S Good Housekeeping Seminar in partnership with the Department of Trade and Industry’s Philippine Trade Training Center last July 30, 2022.

Resource speaker Joel Amante conducted a whole-day lecture and activities to teach the employees how to maximize their outputs in their day-to-day operations efficiently.

Let VIYLine Media Group (VMG) break down the events during the said seminar.

As an introduction, the principle of 5S good housekeeping originated in Japan, to which the acronym corresponds to seiri, seiton, seiso, seiketsu, and shitsuke. In English, it simply means to sort, systemize, shine (cleaning), standardize, and self-discipline.

Companies generally follow this Japanese philosophy to have an effective work process and improve the overall quality of the work environment and the safety of the employees.

Albeit it may seem like second nature for a workplace to follow the program, reality shows that the complete implementation and adherence to the 5S philosophy requires knowledge, determination, and drive from both the employees and the employers.

That said, Rolando Cortez, VGC’s general manager, initiated and commissioned the help of government training agencies to teach VIYLine employees how to properly organize and improve their work quality through the 5S Efficiency Principle, especially as the company continues to grow as its CEO Viy Cortez continue building her corporate empire.

Throughout the day, the employees actively participated in lectures and activities that tested their skills and knowledge in the 5S program.

The participants formed groups per department, and rank-and-file employees, managers, and even the company executives engaged in several friendlies to check who was the most organized.

Floor exercises and presentations were made during the seminar, and all employees had fun with their coworkers and learned how to apply the learnings in their respective departments efficiently.

These activities became a precursor of learning for the employees as the company conducted its 5S Good Housekeeping competition from August 1 to 15. The competition challenged each department to implement what they had learned from the seminar in their actual workstations.

Judged by Mr. Cortez, the company’s chief finance officer, Imelda Cortez, and other panelists, the Packing Department of VGC was deemed the overall champion of the competition.

VIYLine Media Group likewise took home a portion of pride as they came in close as the 2nd placer for the competition.

Further, though unannounced, individual winners were chosen by the management as a recognition of employees who extensively followed the 5S principle. Darryl Bulalacao, April Sangalang, and Criselda Alambra proved to be the most organized employees of VGC, respectively placing 1st, 2nd, and 3rd in the individual category of the competition.

As a part of its unyielding commitment to improving its services and operations, VIYLine Group of Companies would continue to improve its day-to-day transactions through training and seminars to give the customers the best service the group can offer.

Likewise, VGC assures its customers and other stakeholders that the corporation will continue to develop its services and operations as the company continues to soar to new heights.

For more news and updates about VIYLine Group of Companies, you may check our official social media accounts and website viyline.net. For collaborations, you may contact us at 09175384349 or email us at viyline.marketing@gmail.com.